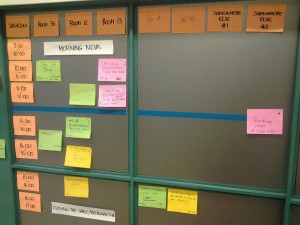 From the 7th to the 9th of March 2013 the first ever Aulanko Open Space took place. It was a conference organized by Agile Finland. As the name of the event suggests the format of the conference followed open space technology.

The venue for the event was a spa hotel in Aulanko, Hämeenlinna. At least to me Hämeenlinna isn’t the capital of software professionals in Finland but its location between Helsinki and Tampere is probably a suitable compromise. In any case the facilities offered by the hotel were very good for this kind of event.

There were 70 places open for participants in the event. For me this was pretty much a must-go event from the beginning and I thought that Finland is full of similarly minded people. Hence I thought that the event will be sold out in a matter of days. Apparently my assumption was somehow wrong since in the end only about 30 of the available slots were fulfilled. Perhaps it was the location of the event or the fact that the other full day of the event was a Saturday – I’m unwilling to believe that Finland lacks competent and excited professionals to fill a conference like this.

Nevertheless the ones that actually joined the event formed a wonderful group of great minds that managed to make a conference worth to remember from its fantastic contents and spirit.

The 7th of March wasn’t yet an open space day. People arrived in the evening to the location and we had a short introduction of things to happen in the next two days as well as some time to get to know each other.

The open space took place on the 8th and 9th. In the beginning I was a bit skeptical whether we would get enough content in the agenda with only about 30 people present. My suspicion was probably partly raised by the fact that for quite a many this seemed to be the first time they participated in an open space conference. My fear was soon proven unfounded and we got easily more than enough quality content into the agenda.

I won’t go through the various sessions I attended because it would just simply need way too much writing. And in the end I wouldn’t probably be able to summarize them effectively anyway.

One thing worth mentioning about an open space event like this is that there probably wasn’t anything unheard of or world shattering presented in any of the sessions. It’s more about sharing knowledge among peers and solving real problems that people have in their everyday work. In that sense it’s much more hands on than regular “speaking head” conferences. And I like that.

Although the conference was meant for developers and testers – i.e. more technical audience – it surprised me how much human interaction and psychology related subjects arose. But I can’t say that was a bad thing at all. It’s probably an area where I haven’t focused too much in my past and I should be learning more. This was a good kick start for that.

Overall I had a blast! Hopefully the tradition of Aulanko Open Space has now started and there will be another event next year. Or other such open space events will be organized elsewhere since nowadays I think I much prefer this kind of events over regular conferences. I just gain so much more from these.

Big thanks to the organizers and everybody who participated. You made an event that will not get forgotten.